So much foolery, we had to start our own country.

Please Help Me Name These Sculptures

Public art (the "f" is silent, by the way) fascinates me.  Somewhere out there tonight, a city council or public arts committee is voting to approve a piece of public statuary.  Once the vote goes through, the artist will diligently begin the production process.  The finished work will be paid for with public funds.

Some of the finished pieces will be admired by most of the community.  Some will even become known works of art, attracting visitors from far and wide.  Some will look like these. 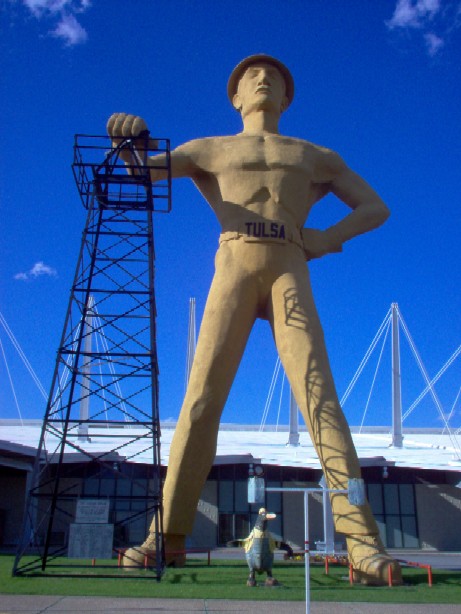 This is the Golden Driller (photo stolen from these guys).  I'm not even gonna comment on the name.  In case you missed his belt, he's from Tulsa, Oklahoma.  I have no explanation for the tiny penguin in work clothes between the Driller's feet, but I think I might have preferred a 40-foot penguin, frankly. 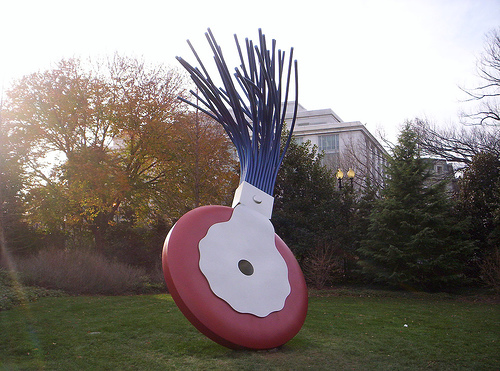 "Typewriter Eraser, Scale X" (photo stolen from this guy).  To be completely honest, I have no idea who paid for this, or why.  This little lovely can be found in the art park adjacent to the National Archives in Washington, D.C. Apparently it is by Claes Oldenburg and Coosje van Bruggen, who were Very Important Artists who haunted the "happenings" of the 1960s.  This is what was happening, apparently. 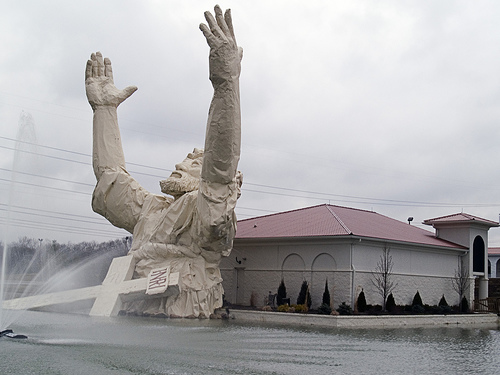 This one rather frightens me.  It's somewhere in Ohio, and it must have great meaning for the people of the church cowering in its long, scary shadow.  This guy took the picture and he named it "Jesuszilla," which tickled a local or two.  They left comments on the photographer's site indicating that the statue is locally known as "Cheesus," which tickled ME.  I have no explanation for Jesus standing under a sprinkler, waist-deep in water.  It kinda looks as if he's playing catch with the typewriter eraser above, however . . . how far apart are Washington D.C. and Somewhere In Ohio?

There is nothing I can (or should) say about this, except that it was once located outside the McDonald's in Edmundston, New Brunswick, Canada.  O, Canada. 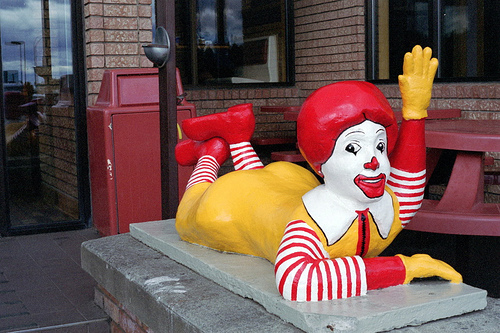 It is no longer there.  I realize that it was not publicly-funded statuary, but privately-funded market-driven patio seating; still, I felt it fit in well with this group.  Okay, I'll ask it -- where would YOU sit?  (Photo stolen from these guys)

Which brings me to what started all of this in the first place.  This is not news, mind you -- the sculpture I am about to show you was installed in the year 2000 -- but I never got my two cents in at the time (not then having a blog, and being fairly engrossed with plucking my eyebrows). 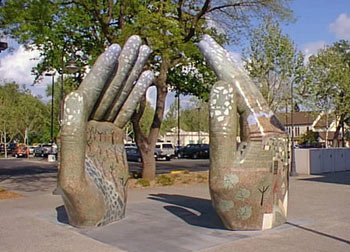 These are the Chico Hands (photo stolen from The official City of Chico Website).  The sculpture is a granite and marble chip terrazzo, and the artist was Donna Billick (in case you want one of your own).  From the text:

There was no expenditure listed in the text; I checked.  I know it's a matter of public record, but I'm sure they were just being modest, really, by omitting something like that.  Well, how much would YOU pay for these hands?  Don't answer -- WAIT!  There's LESS!

Here's where you come in.  There's no prize, other than my undying affection and simpering gratitude, but I'm hoping both of you will submit new names for these sculptures.  Post them as comments.  Think fun!  Think children may be reading this (though probably not very BRIGHT children, obviously)!  Think outside of the box, then get a big board and smash the snot outta that over-hyped box!

Posted at 10:47 PM in Nobody Loves a Critic | Permalink

Distant blessing, floating on your blog, Loving words, is my most sincere greetings. A caring heart, greeting each other in a genuine concern, no more words, feeling warm wishes, blessing forever! Friends are healthy and happy!

Chance to read your blog, I really like your blog, let me learn a lot! I will focus on your blog, refuels!

Caly, than fok your the info! I saw that the sculpture had burned down, which was very sad, because it obviously meant a lot to a lot of people. I just didnt care for its aesthetics, but thats me. Thanks again! -- Laurie

The Jesus statue burned down about a week ago. Most people called it Touchdown Jesus or Big Butter Jesus (from the Haywood Banks song about it.) There's a website with a bunch of photoshopped pics of it that calls it Jeeebus.

Since it burned down, people have been calling it Terminator Jesus because the only thing left are the giant steel arms rising from the pool. The church owner says he will rebuild. It's in Monroe, Ohio, about halfway between Cincinnati and Dayton.

1. Leave it. This Big Oil Man resembles when Tulsa sat atop the world's largest known pool of oil.
To celebrate this good fortune, a giant roustabout was built on the Tulsa Fairgrounds in 1953. Dubbed "The Golden Driller,"
The Penguine is part of a 2003 community fundraiser benefiting a Tulsa Zoo exhibit. Penguines were placed all over Tulsa at local businesses that sponsored the project. This one's name is "Roustabird", a filthy oil-drilling penguin in overalls and a hard hat.

#2. "Wheee!!! Typewriter Obsolete; Related Office Supplies Enjoying Early Retirement"
(For what it's worth, I've always thought the Oldenburg piece is great fun. I think it gives a nod to the ancient Colossus tradition, and calls attention to DC's bureaucracy, and, just maybe, hints at the risk of disinformation.)

#3. (Disclosure: I believe that Jesus was and is the Messiah, though neither eight stories tall nor badly sculpted of concrete.)
"...We Need A Bigger Cross, And - Hey, Knock It Off! We Did The Flood Thing Already..."

#4. "Ronald "Jacko" McDonald," Or, "I have spent my entire life helping millions of children across the world. I would never harm a child."

I just happened to stumble on your website and I feel compelled to tell you:

That jesus one is also called "Sweet Butter Jesus", it's just north of cincinnati, I've seen it, and it's terrifying.

I just happened to stumble on your website and I feel compelled to tell you:

That jesus one is also called "Sweet Butter Jesus", it's just north of cincinnati, I've seen it, and it's terrifying.

Thanks Annie! It's difficult to render a personal opinion about art without sounding like I'm running down the spiritual meaning behind it -- I'm not. I just find the statue itself odd and frightening, especially with the inexplicable water feature.

Just thought you'd like to know that the Jesus in Ohio is referred to by locals as "touchdown Jesus." I am assuming that these are locals who do not actually attend the church, but you never know.

The path of the righteous man is beset on all sides by the iniquities of the selfish and the tyranny of evil men. Blessed is he who, in the name of charity and good will, shepherds the weak through the valley of the darkness.
For he is truly his brother's keeper and the finder of lost children. And I will strike down upon thee with great vengeance and furious anger those who attempt to poison and destroy my brothers. And you will know I am the Lord when I lay my vengeance upon you.

Go ahead, Snorpht, but no promises, of course. And please be kind to my friends here (I know you will). I have so few readers I can't afford to run any off. MWAHH!

Shot?
What do you this this is a freekin NASCAR race?
Don't need no shots. Merely a RU486 and a dab of K Y. I'll cover the drugs and alch.

And LauFoo, Can I pick my own prize? Huh? Huh? Huh?

1. The Tulsa Deep Driller or how to make the penguin cry for mercy: suffer baby
2. The 60's: Not Bad art just good drugs
3. I love Jesus too but this is just disturbing
4. You Deserve a break today, among other things momma
5. Don't give the man the finger, give him 8 with 2 thumbs: suckers!

Those are great, Jane! Had to think about the Merle Norman one for about three seconds, ha ha. "A Small Church" killed me. Thanks for playing!

Snorphty, that's the longest title I ever did see. More like a novella. But it's vintage Snorpht (although I admit I thought I knew all your accents, but this is the first time I've seen Sicilian). I'll never look at those hands the same way again, ha ha. Gracias, Senor Snorpht!

Oh I love this sort of stuff Swami. hahaha. This made me laugh. Ok I want to name em:
1. Tulsa Tulsa A Waste of Pulp-a (or the taming of the penguin)
2. Erase to the Finish
3. A Small Church
4. Rest for Merle Norman's Foolish Son
5. This Hand is Your Hand-This Hand is My Hand

Thanks for the chance to play Swami Dearest. I've never won anything. xo
Love ya,
Jane

The comments to this entry are closed.