So much foolery, we had to start our own country.

Stop me if you've heard this one before . . .
Saturday night I had a near-death experience when I put the most foul, most awful, most repulsive substance ever conceived into my mouth.  While driving.  And I had no place to spit it out.
10:30 at night, while driving home from Chico where I returned my friend Cheryl and her daughters to Grandma's house, I got the bright idea to try a new-to-me candy in my purse.  I had been given two of these candies by The Nicest Man In The World, to give to my daughters.  (He loves kids, owns a convenience store, and often gives the girls lollipops.  Now stop thinking nasty thoughts, you.)   The candies in question were Mexican candies, so I knew better than to let the kids pop them into their mouths unless I had tried the candy first.  But who would be MY food-tester?
So, zipping along the canal road in the dark, I dug through my purse for six minutes until I found that stupid candy.  Popped one into my mouth.  Chewed.
Urp.
Bad idea.  INSTANTLY knew it was a bad idea.  I couldn't have known what was in the thing because it was too dark to read the wrapper, but later I learned that the hatefulness came from tamarind flavor.  The wrapper describes it thus:
"Caramelo con relleno sabor tamarindo," which translates "tamarind-flavored caramel candy with chili."  Mmmmmm, boy.
I think I could get them for false advertising.  Maybe I could supply an alternate product description for them:
"Tastes like foot odor, if foot odor had a taste, with liberal doses of aspirin and vomit." 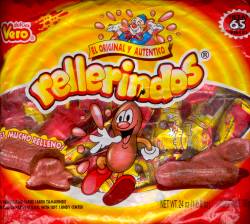 So there I was, driving along wondering exactly how long it would take to wolf that puppy down, and would the taste linger in the crevices of my teeth until I could scrub the hell out of my mouth with a Colgate-loaded toothbrush?  I stopped to take note of my body during the crisis:
How would I have explained it to the sheriff had I been pulled over for speeding and/or weaving?  Probably by foaming at the mouth, spitting while he held my hair back, and gasping, "Rellerindos!  Rellerindos!"  I think I would have walked.

YUM! This is a very tasty Rellerindo. Eat these whenever you are hungry and I promise you will lose weight. Stimulates your mouth while offering mostly acid for your stomach.

kids at my school sell these for a quarter each and man r they making a nice little profit!!!!! haha im eating one rite now!!!!!1

Right on all counts. Im sure that people of diminished mental faculties will be THRILLED to have a ham for an online representative. How kind of you to include them in your diatribe.  : )

I am eating one of these lovely candies as well. You are entitled to your opinion and voicing your opinion, but you are a ham. I am addicted to most mexican candy and will happily recommend these to everyone! You retard!

Yum I am eating a Rellerindo right now. You are stupid because you have to suck not chew. I am sorry you were conditioned to think candy should be sickeningly sweet loaded with sugar and unhealthy. Rellerindos are extremely rich in citric acid, malic acid and ascorbic acid because they are filled with tamarind paste. People trying to kick the sugar habit need to keep them on hand.

Laurie's reply: Sorry to reply this way but Typepad wouldn't let me comment, on my own site! AARRGGHH.

I'm very pleased that Rellerindos have a market and that people love them. I had a very unpleasant experience with one and won't try it again. But I did try it! And as far as the acids go, I eat lots of fruit (sour green apples, citrus, strawberries, berries, peaches, etc.), which I prefer. Thanks for stopping by.

your crazy, you have no appericate for hispanic candy. Its a complelte insult. Don't complain about some candy.

Holy crap! I grew up in So Cal and I can't remember if that's what those God-awful nasty things were that were packed in several friend's lunchbags, but it sure sounds like the vomit-rockets that I once had the misfortune to put in my mouth.

Sort of reminds me of the time I thought I was reaching into a bowl of Jelly-Belly jelly beans but they were those foul Harry Potter candies - the Beritie Bot's ALL FLAVOURED jelly beans! And when they say ALL flavours, they mean it! Vomit and Ear Wax were the two I was unfortunate enough to put in my mouth, at the same time!

Billy Bob - Your description of the candy is....interesting. Kind of makes me wonder a bit about Foolery's personal tastes.

Did notice that the words 'spit' and 'swallow' weren't mentioned anywere - although 'Snorpht' was....interesting.

Oh man! I got one of these on a trip to New Mexico. Worst "candy" ever!!! My taste buds were not designed for that kind of abuse.

I just don't have a taste for them. I like most things but I have learned that the hardest part of any culture's cuisine to appreciate is the sweets. Probably goes back to our childhoods, where we learned how sweets "should" taste to us. I will leave the Rellerindos to you -- eat 'em ALL, ha ha!

Just got back from Cypress, CA where some of these were at the office I was visiting while out on business.

I'm hooked! I love these! It reminds me of chili covered mango snacks.

I suck them down all the way and enjoy the heat! Nothing like mixing sweet with the saltiness and heat that is this candy. Awesome!

Again, so glad Rellerindos has found its marketing niche. It apparently lies outside of the reaches of the educational system.

you're suppose to suck on it, and when it gets to the filling inside throw it out you retard

I'm so glad they have found a market.

ur a dumbass, Rellerindos are the best thing ever!

I hadn't thought of that. Jessie, you may be onto something. Lima beans were kind of losing their horrible luster anyway.

You could always keep the candy around to use for punishment. "Be nice to your sister or you're gonna have to eat a piece of candy!" :)

Yeah, once in a while ya gotta send up a lob just to see if he's paying attention.

Whew- I'm glad you explained that it was CANDIES you were talking about when you said foul, awful, repulsive substance in your mouth...oh, I'm bad. I can just imagine what Snorpht is going to say.

The comments to this entry are closed.